GRINNELL, IOWA — The Union of Grinnell Student Dining Workers (UGSDW) filed for a union election with the National Labor Relations Board today that would expand the existing union to cover more than 750 hourly student workers at Grinnell College, from mailroom and library workers to tutors, graders, and research assistants. UGSDW, the first independent undergraduate labor union in the country, currently represents student workers in Grinnell’s Dining Services. Student workers have now organized with UGSDW for a historic campus-wide union of undergraduate student workers. 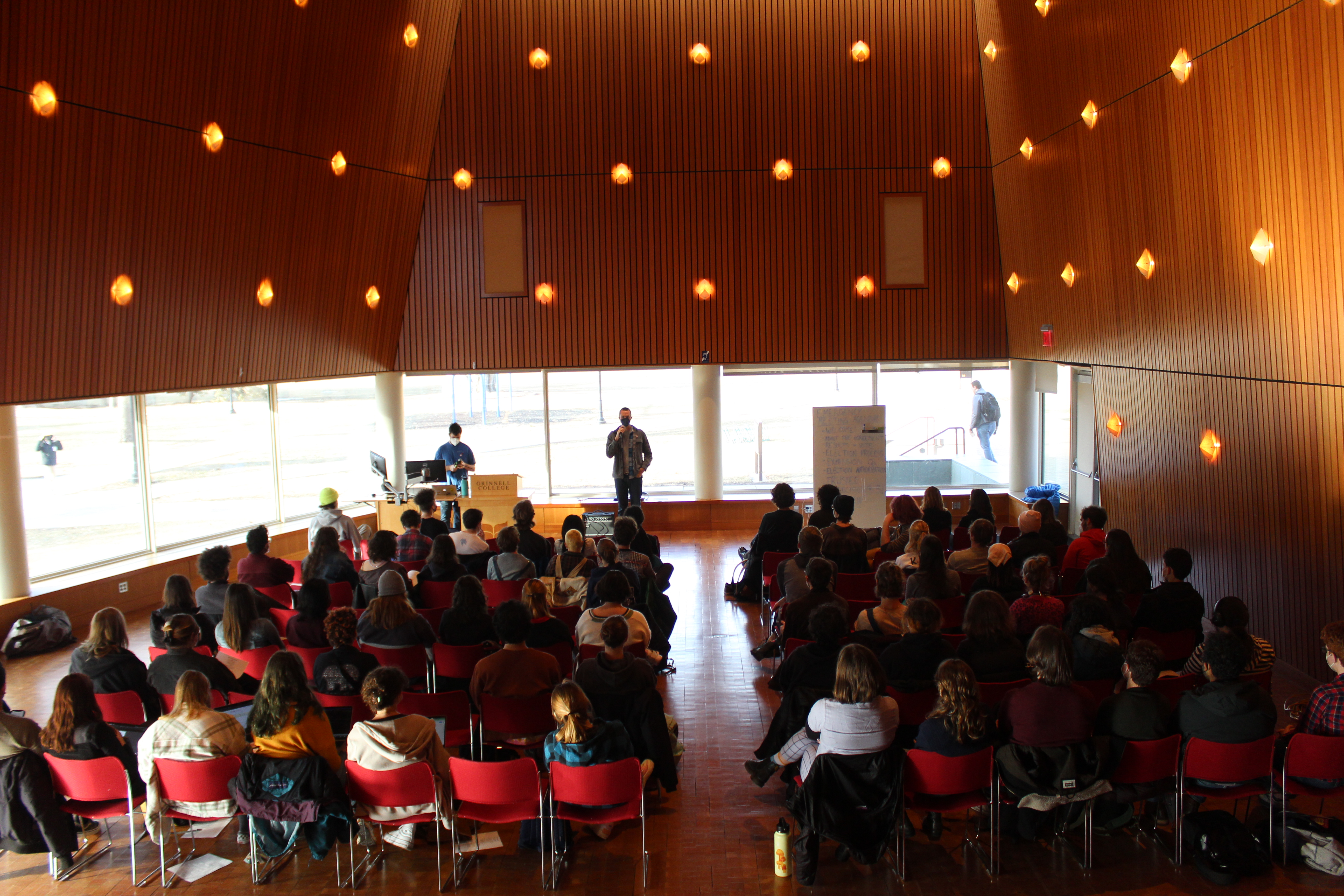 In the 6 years since student dining workers formed UGSDW, they have secured a base wage increase from $8.50 an hour to $10.40, just-cause employment, a grievance procedure that has secured reinstatement for more than 150 workers, and more. Expansion of the Union would empower all hourly student workers to bargain with the College for improvements like these and more. Grinnell student workers have already successfully organized for safer and more equitable workplaces, and an expanded union would allow those wins to be enshrined in a legally-binding contract.

“Every student worker deserves the protections and the voice that comes with a union. Grinnell cannot function without student work – and it’s past time for every student worker to have a say in their workplace’s policies,” said Keir Hichens, President of UGSDW and student publications worker.

“I am excited for the security the union expansion will provide,” said Franny Atmore, garden apprentice and Grinnell Outdoor Recreation Program (GORP) student leader. “This expansion means that I can not only advocate for myself but also have others advocate on my behalf in the case of any workplace incidents. You never know when or if something is going to happen at your job and it’s nice to know there is a support net for us in case it does.”

Prior to filing, UGSDW signed a Neutrality and Election Agreement agreement with Grinnell College. UGSDW’s membership voted to ratify the agreement with 98.9% of participants supporting ratification, out of 275 voters. Grinnell’s Board of Trustees passed a resolution ratifying the agreement on Thursday, March 3. Under the Agreement, the College will recognize hourly student workers’ right to unionize and agree to the scope of the expanded union. The College also consented to an NLRB election, where student workers can decide on union representation in a secret-ballot election. The Agreement further sets rules of conduct for both UGSDW and the College during the election process. Notably, the College agreed that all senior staff will remain neutral in public communications throughout the election process.

UGSDW previously filed for an election to expand to all student workers in October 2018, which led to a legal battle after Grinnell College challenged student workers’ rights to unionize. Despite successfully defending student workers’ rights at an NLRB hearing and winning the subsequent election by a 5 to 1 margin, UGSDW was forced to withdraw its petition in December 2018 to protect collective bargaining rights for student workers nationwide. In 2019 and early 2020, UGSDW engaged in conversation with the College on an agreement for expanding to certain, non-academic student workers, but the Board of Trustees terminated the negotiation. Student workers have continued organizing throughout the pandemic, winning stronger COVID-19 safety protocols and wage increases in multiple workplaces.

The present Agreement came about after months of organizing by UGSDW members, including multiple rallies in fall 2021. Organizers collected authorization cards from more than 500 student workers since November 2021, and approached the College administration in December, leading to over a month of negotiations that concluded with an agreement signed on March 4. Negotiations between UGSDW and the College were successful due to the strong organizing efforts of student workers, a change in the composition of the National Labor Relations Board, and a new and receptive College administration.

“We are glad the College has agreed that student workers should have the opportunity to decide for themselves whether they want a union, without the threat of legal action to undermine their rights,” said Isaiah Gutman, Chair of UGSDW’s Expansion Committee, student publications worker, and research assistant. “We look forward to a free and fair election and will fight for a strong contract for all student workers after certification.”

UGSDW’s expansion efforts are part of a nationwide wave of student worker unionization. Undergraduate student workers at Kenyon (K-SWOC-UE) and Dartmouth (SWC) Colleges have filed for union elections in the past year, while graduate student employees from the University of California (SRU-UAW), Harvard University (HGSU-UAW), Columbia University (SWC-UAW), and more, have achieved major victories. UGSDW stands in solidarity with all student workers fighting to unionize and calls on all institutions of higher education to follow Grinnell’s example in respecting our right to unionize.

UGSDW expects a mail-in election to take place near the beginning of April, which will run for 2 to 3 weeks. Student workers with hourly-paid jobs outside of Dining Services who have worked 2 or more hours in any week during the Spring semester will be eligible to vote. Student workers are closer than ever to winning a historic campus-wide union, and UGSDW has full confidence that student workers will vote overwhelmingly in favor of unionization.

Click here to learn more about the UGSDW expansion.

Founded in 2016, UGSDW is the first independent undergraduate labor union in the country. UGSDW is a democratic organization that fights for fair wages and working conditions for Grinnell College workers.