The Union of Grinnell Student Dining Workers (UGSDW) held its first general meeting of the fall 2021 semester on Saturday, November 6. At the meeting, attended by more than 40 student workers, the Union announced its next campaign: demanding a starting wage of $15 an hour for all workers in Dining Services. The campaign comes after workers have experienced increased stress on the job due to record-low employment in the Dining Hall. Even with the number of stations greatly reduced, dining workers have reported unreasonable conditions including having their role changed multiple times in a single shift, filling the roles of multiple workers at once, and working stations where they have not received the necessary training.

Throughout the meeting, workers shared stories about their experiences with understaffing in Dining Services. One worker pointed out they had been assigned to work the vegan and gluten-free stations with no experience or training, putting those with severe allergies and dietary restrictions at risk. Another explained how their closing shift lasted 40 minutes longer than expected, cutting into time they were planning to use for homework. A student leader-in-training remarked “We [student leaders] are paid more to cover multiple jobs, but student workers doing the same thing are making $10.40 no matter how many jobs they do.” Multiple student workers attested that they considered quitting their jobs due both to the low pay and the working conditions, and that without a wage increase they would likely leave to work another job. 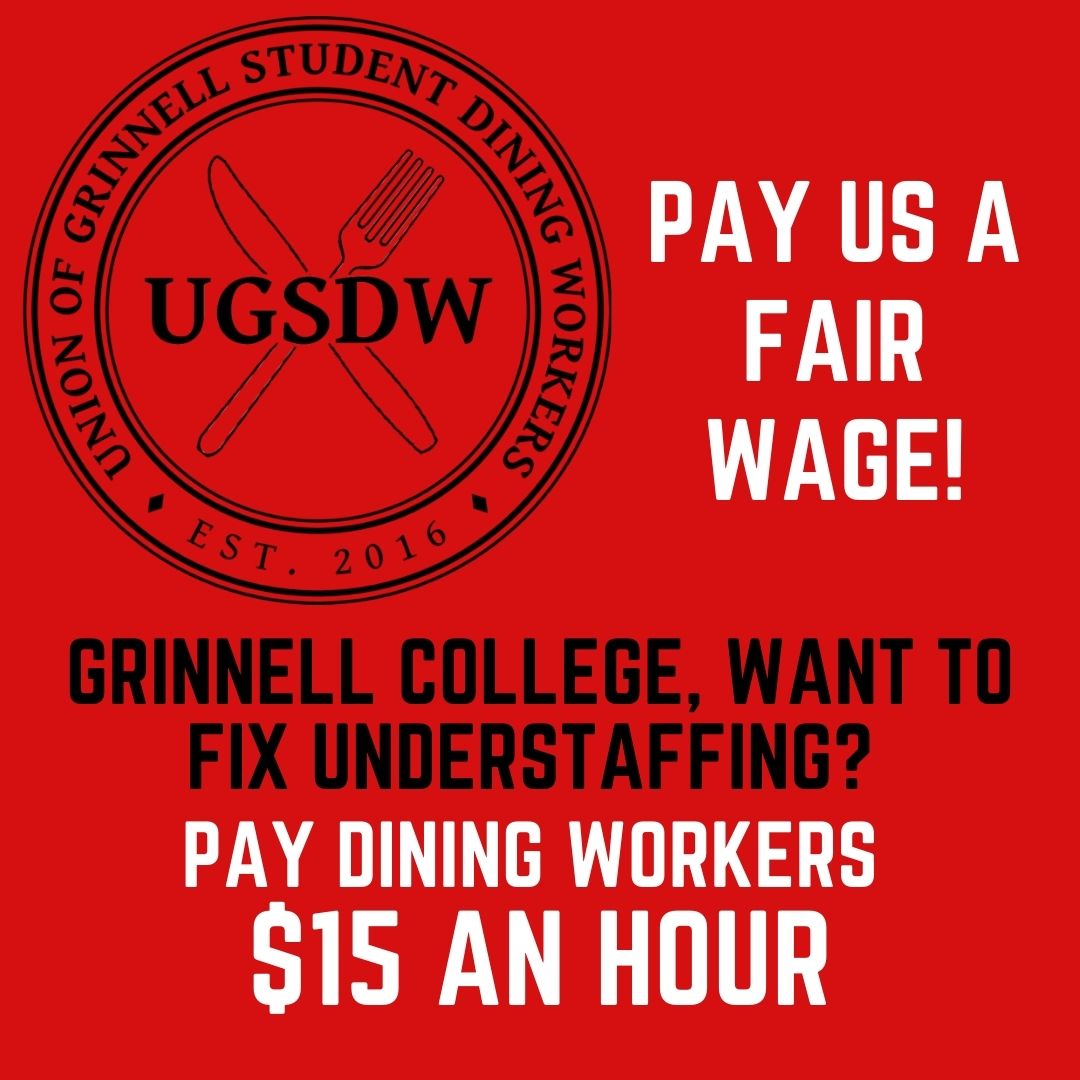 Union President Sofia Carr explained that the demand for a $15 wage was not a full solution to the issues facing dining workers, but that it is a start that would both properly compensate workers and potentially attract more workers to Dining Services. Carr and other members of the Union’s Executive Board stressed that the fight for $15 would not be an easy one, and that student workers should be prepared to engage in a long campaign.

Executive board member-at-large Isaiah Gutman argued that the College’s lack of action on wages in the past led to the current situation in Dining Services. “When you look at where we are, with these conditions, workers can see exactly what the College thinks about them. The College only wants to pay people the bare minimum, even if it interferes with the operations of the Dining Hall.” Other attendees emphasized that the College’s continued functioning is dependent on dining workers, as well as all student workers on campus. Despite this, the College resists efforts from UGSDW to improve workers’ conditions, to pay them a fair wage, and to provide them with adequate protections like paid sick leave. Student workers at the meeting agreed that only collective action, asserting the power student workers have, could force the College to agree to demands like the $15 wage.

Also covered at the meeting were updates to the ongoing demands in the mailroom, the Union’s possible affiliation with UE (United Electrical, Radio, and Machine Workers of America), and the failure of Dining Hall staff to address students by their pronouns. Student workers involved in the mailroom workers’ campaign stated that they are committed to fighting for all of the outstanding demands that the College has not addressed.

Additionally, Carr and Executive Board member-at-large Keir Hichens shared quotes from Dining Services director Jeanette Moser from a meeting Moser called with UGSDW on Tuesday, November 2. When Board members brought up that due to understaffing, Dining Services was forcing student workers to do the jobs of multiple workers at once, Moser brushed off the concerns, saying instead that there was “less time to stand around.” Moser and Mary Greiner, assistant VP of human resources at the College, stated that student workers should advocate for themselves individually rather than through the Union. UGSDW members emphasized that the Union exists to support student workers in their complaints against their bosses, and that without solidarity and collective power, student workers in the Dining Hall would not have been successful in winning back pay after the College committed wage theft. Without UGSDW’s efforts, Dining Services would have continued to commit multiple errors in compensation for workers, including paying high school workers 40 cents less per hour than the contract requires and failing to make the application for experienced student pay available as stipulated in the contract.

As UGSDW’s organizing efforts have shown time and time again, it is the collective action of workers that drives improvements in working conditions and wages, not the generosity of their employers. At the general meeting, Union members reaffirmed their commitment to standing in the long tradition of workers who fight together for their rights and their well-being in their workplaces. Student workers refuse to allow the College’s inaction and inattentiveness crush their spirits. Instead, they pledged to continue the struggle for a fair wage, better working conditions, and economic and social justice for all members of the Grinnell community.