Our Letter to the Board of Trustees

On Friday, February 8, forty UGSDW members disrupted a meeting of the Board of Trustees. On Saturday, President Quinn Ercolani sent a letter to the trustees, explaining the reasons behind our actions and reiterating our request for discussion and dialogue with the college. 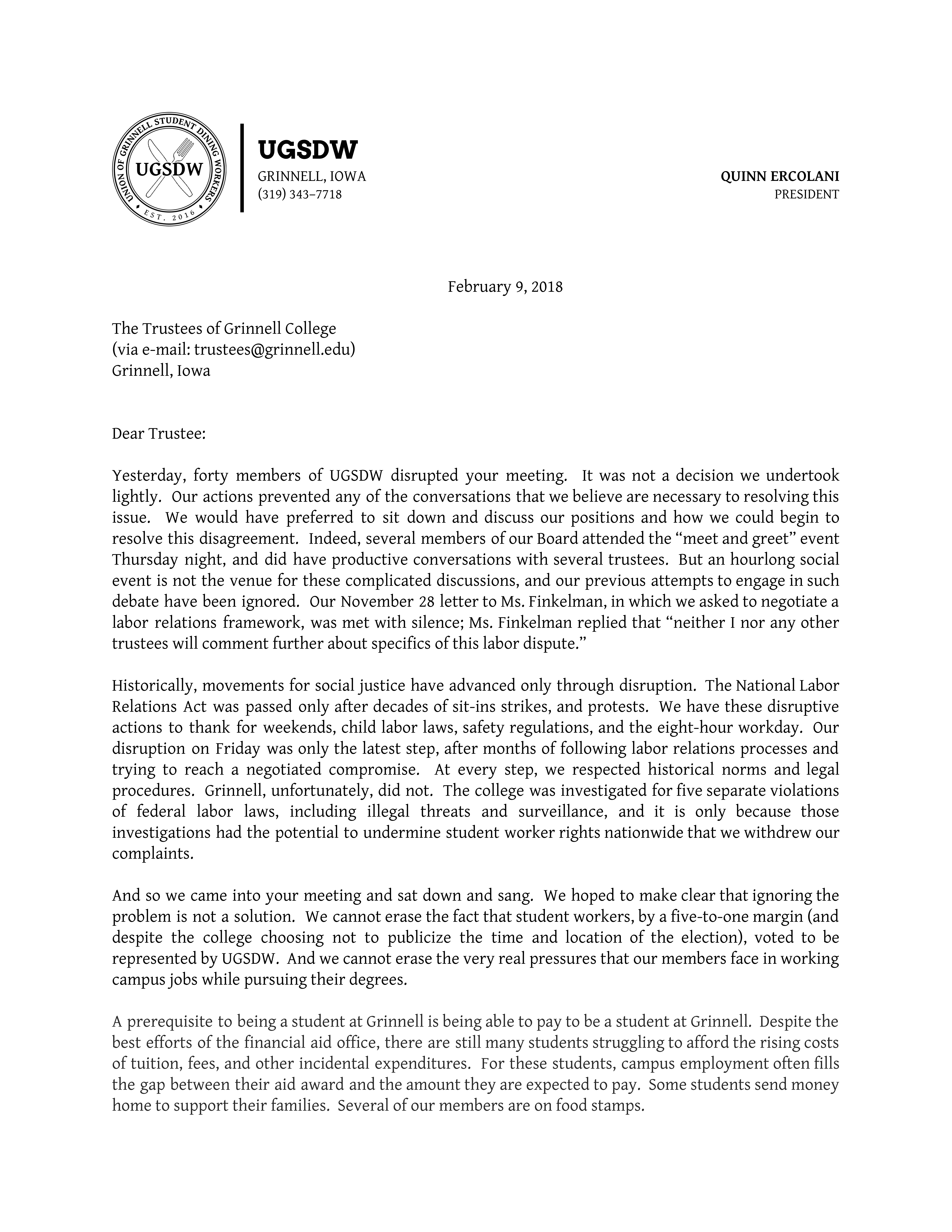 Yesterday, forty members of UGSDW disrupted your meeting. It was not a decision we undertook lightly. Our actions prevented any of the conversations that we believe are necessary to resolving this issue. We would have preferred to sit down and discuss our positions and how we could begin to resolve this disagreement. Indeed, several members of our Board attended the “meet and greet” event Thursday night, and did have productive conversations with several trustees. But an hourlong social event is not the venue for these complicated discussions, and our previous attempts to engage in such debate have been ignored. Our November 28 letter to Ms. Finkelman, in which we asked to negotiate a labor relations framework, was met with silence; Ms. Finkelman replied that “neither I nor any other trustees will comment further about specifics of this labor dispute.”

Historically, movements for social justice have advanced only through disruption. The National Labor Relations Act was passed only after decades of sit-ins strikes, and protests. We have these disruptive actions to thank for weekends, child labor laws, safety regulations, and the eight-hour workday. Our disruption on Friday was only the latest step, after months of following labor relations processes and trying to reach a negotiated compromise. At every step, we respected historical norms and legal procedures. Grinnell, unfortunately, did not. The college was investigated for five separate violations of federal labor laws, including illegal threats and surveillance, and it is only because those investigations had the potential to undermine student worker rights nationwide that we withdrew our complaints.

And so we came into your meeting and sat down and sang. We hoped to make clear that ignoring the problem is not a solution. We cannot erase the fact that student workers, by a five-to-one margin (and despite the college choosing not to publicize the time and location of the election), voted to be represented by UGSDW. And we cannot erase the very real pressures that our members face in working campus jobs while pursuing their degrees.

A prerequisite to being a student at Grinnell is being able to pay to be a student at Grinnell. Despite the best efforts of the financial aid office, there are still many students struggling to afford the rising costs of tuition, fees, and other incidental expenditures. For these students, campus employment often fills the gap between their aid award and the amount they are expected to pay. Some students send money home to support their families. Several of our members are on food stamps.

Better working conditions are better learning conditions. Student workers cannot as fully actualize the value of a Grinnell education if they spend 20 hours a week working. Our members skip doctor’s appointments for fear of losing their jobs. Our members take fewer classes to enable them to work more hours. Their campus employment, far from providing additional educational value, is jeopardizing their entire learning experience. And this burden falls disproportionately on low-income students, students of color, and international students.

To try to subjugate the economic relationship between students and the college to their educational relationship is to put on a blindfold, climb into the ivory tower, and slam the door on hundreds of capable and deserving people. As a community, we cannot ignore the economic reality which governs who can attend this institution. We must face it, and do what we can to ensure equitable access.

But we must also recognize that student work at Grinnell is not the same as work on a factory floor, or even the same as the work of TAs at graduate institutions. While UGSDW’s experience in Dining Services over the last three years certainly demonstrates the viability of a student union, there are unique challenges to a union covering Grinnell’s entire campus, and valid concerns about the effects unionization would have on Grinnell’s core mission.

Collective representation is a human right—“everyone has the right to form and to join trade unions for the protection of his interests,” reads Article 23 of the Universal Declaration of Human Rights. The only way to reconcile these rights with the very real pitfalls of a campus-wide union is for representatives of UGSDW and the college to meet and discuss the parameters and ground rules for collective bargaining. We are not ideologues—we are open to limiting the jobs which would be covered, the issues which could be bargained over, and the scope of contractual rules and the union’s right to students’ personal information.

Before, when we raised these possibilities, the college replied that we were legally unable to commit to any of them. Indeed, the college’s refusal to meet with us earlier was also justified on legal grounds—that while our case was pending before the National Labor Relations Board, no discussions could be had.

Now, however, there are no cases involving our union’s expansion which are pending before the Board. There is no legal reason that the college cannot begin to have informal conversations about this issue with union representatives. This is more than speculation by students untrained in the law—universities like Brown, Columbia, and Georgetown faced nearly identical situations, and were able to meet with their respective unions and reach agreements. In fact, at Columbia, these agreements were negotiated in part by Proskauer Rose LLP, the very law firm that the college retained last fall. Furthermore, these agreements were legally binding contracts, which prevented the unions from compromising academic freedom, striking over a first contract, or impinging on the universities’ educational missions.

There is no hidden slippery slope. Opening the door to dialogue will not inevitably lead to recognition and a restrictive campus-wide union. Refusing to engage in discussion, however, will lead to more labor strife and reputational damage for the college, and will do nothing to fix the underlying issues.

It is now up to the college to decide whether it will work with its students to improve campus work and promote equity and fairness. We hope you will ask President Kington to meet with us to begin this process.