A New Beginning in Our Fight

Student Workers Envision a Union for All As Trustees Reject Partial Expansion.

On February 8, 2020, Grinnell College Board of Trustees voted unanimously against partial expansion, a proposal from President Kington that would allow UGSDW to expand union representation to roughly 200 student workers outside Dining Services. Along with this decision, the Board of Trustees announced a few policy changes with regard to student employment, including an annual increase in pay rates and standardization of relevant HR policies.

These moderate improvements in student worker pay and working conditions directly result from the organizing efforts and direct actions of student workers over the past two years, as a few trustees themselves acknowledged in a meeting with members of the UGSDW Executive Board. “The voices and actions of student workers have clearly had a tremendous impact on the trustees,” said Jacob Schneyer ‘21, UGSDW President, “It’s clear that without the strong organization of the union, these changes never would have happened.” 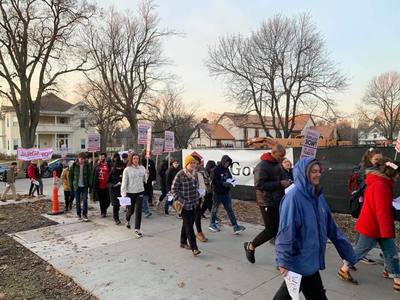 Despite these improvements, student workers remain resolved in continuing our fight for worker justice on campus. At a general meeting that immediately followed the decision, student workers discussed our vision for an inclusive and powerful UGSDW, laid out next steps, and committed to carrying out various projects to promote worker justice and improve material conditions on campus.

We appreciate the Board of Trustees’ enthusiasm for improving worker conditions, but we continue to believe deeply that positive change must be driven by student workers themselves, and that only workers have the right to decide if they should have a union. While we will engage in productive dialogues with Grinnell College, worker justice has never advanced at the permission of bosses. We will harness the energy we already have, ground our fight in material economic issues, and build broad-based support. “We don’t need the trustees’ permission to help the workers on Grinnell’s campus, and we always continue to do so.” added Ryland Rich ‘22, UGSDW Executive Board Member-At-Large.